“A showcase of the finest feature-making from around Europe and the world.”

Rome, Italy May 29, 2020 Announcement Virtual IFC 2020, Sep 14-15-16 My preparation #IFCROMA Register via: Please find attached the official invitation and the first important information about the…

Thanks for that. As I live in Rome, I have no excuse not to try and be there.

Out of curiosity - have you been there? Any impressions to share?

As you probably know, the IFC moves around each year to a different European city. Last year it was in Prague. Next year it will be in Rome. I attended for the first time this year (a few months ago) when it was held in southern Ireland. Not only was the IFC free to attend, but over the course of four days, we were treated to a banquet dinner, musical entertainment, and field trips to the Jameson whiskey distillery and Spike Island (Ireland’s version of Alcatraz) courtesy of the Irish tourism board and RTE, Ireland’s state-run national broadcaster. I don’t know how typical that is or if our Irish hosts treated us unusually well, but it was unexpected and incredibly nice.

As for the content of the conference itself, there were some interesting discussions with people like Fergal Keane, the BBC’s Africa Editor, who took time out from covering the political drama in Sudan to share some stories with us from his years of experience. And renowned audio recordist Chris Watson played sounds he had captured of mating humpback whales, orcas using echolocation to hunt for fish, howler monkeys, and tropical birds from the Costa Rican rainforest. I think the most interesting was the creaking and melting of underwater glaciers that he recorded by dropping a hydrophone on a long mic cable down a crevice between the ice!

The primary focus of the International Feature Conference, however, was the close listening and critiquing of audio documentaries from around the world. Some of them were in English, but others – from places like Norway, Poland, Austria, and The Netherlands – were in other languages, so we read along as subtitles appeared on a giant screen. Then we broke up into smaller discussion groups where we spent twenty minutes or so engaging in spirited conversations about the various choices the producers made in assembling their stories. It reminded me of the group listening discussions when I was taking classes to first learn to make radio documentaries many years ago, but in this case, it was really fascinating to hear some of the differences in style and cultural norms that came across in some of this work. Moreover, it was really eye-opening, since I never had any idea (or frankly, gave much thought) to what a radio documentary sounded like in China, for example. I think newer producers, in particular, might especially benefit and be inspired by this experience (though there’s plenty to take away for more seasoned producers as well).

Even more than the listening, however, the aspect that I enjoyed most about the IFC was that aside from a handful of fellow American attendees, it was entirely an international crowd. I met producers from places like Australia, Nepal, Belgium, and Finland. Making audio documentaries can be a pretty lonely endeavor at times, but now I feel part of an even bigger community, and I’ve made friends and contacts from all over the world that I now hope to visit to gather future stories for my podcast (first stop: Lithuania).

To be fair, this conference was pretty intense. It probably could have been a bit shorter, since I was feeling some ear fatigue by the end (though that was probably also the result of sleep deprivation and having attended three conferences in a row). Although it was done extremely well, reading subtitles for a 45 minute documentary can still sometimes feel a bit tedious, so I reached a point where I found myself secretly cheering whenever we were treated to an English language feature once again. And I’ve never been a huge fan of things like book clubs or film discussion groups, so by the third day of this, I was sort of ready for it to be over. Though I did enjoy my experience overall, I’m not sure that I would journey across the ocean just to attend a future IFC (unless I was already planning to be in the area). I’m still really glad I went, however, and I think it’s something worthwhile for everyone to experience for themselves at least once to see what they think.

Thank you for sharing! This sounds like an amazing experience and I just added it tentatively to my calendar…

Great account; thanks for that. I really shouldn’t miss the opportunity.

The organizing team have now published a call for submissions:

We are looking for the best, most innovative and powerful pieces you have made over the past year. We’re asking you for programmes that are creative, daring but rigorous. We’d like to hear pieces that move beyond true crime and that are really bold and ambitious in their use of the medium we all love.

We will pay special attention to content that’s inclusive in terms of minorities and that reflects the full diversity of society today. We’re keen to hear programmes that challenge and engage the listener by offering the widest vision of the world around us.
We are looking for one-off programmes and series – but none should exceed 60 minutes in length. 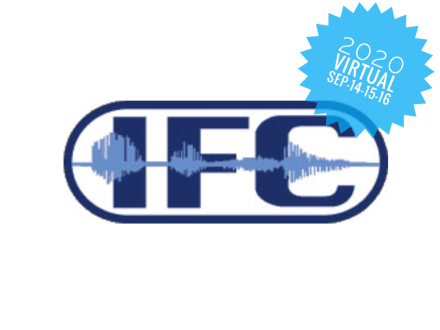 Coming up, the first virtual IFC!

Great news! Thanks for sharing that, Thomas.